The hearing centered on a proposal sponsored by Senator Elder Vogel, Senate Bill 724, which would help the state comply with federal nutrient management requirements and reduce run-off pollution.

During the hearing, Phil Durgin, Executive Director of the Pennsylvania Legislative Budget and Finance Committee, reviewed a report his committee prepared for lawmakers in 2013. The report, titled “A Cost Effective Alternative Approach to Meeting Pennsylvania’s Chesapeake Bay Nutrient Reduction Target” provided the legislature with an overall summary of the issue, including what happens if the state fails to meet the targets set by the federal government. The committee concluded that while it is unclear what action the federal Environmental Protection Agency (EPA) would take, additional reductions may be imposed on wastewater treatment plants. 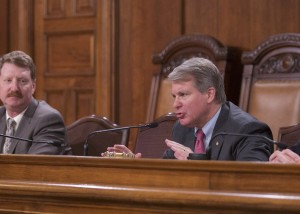 Ed Schafer, who is the former Governor of North Dakota and former United States Secretary of Agriculture, testified that the bulk of the nitrogen reduction requirements needed in order to comply with the federal regulations come largely from agriculture.

Schafer noted that the model employed in North Dakota is an ideal model of private investment mixed with environmental stewardship.

Individuals from agricultural-based organizations also testified, including National Milk Distributors Association member Mike McCloskey. McCloskey testified in support of Senator Vogel’s proposal, stating that his organization is seeking voluntary solutions that help with cleaning up the environment, highlighting the efforts of decades by the dairy industry.

Family-owned Kreider Farms noted that if Pennsylvania does nothing, it would set efforts to address the issue of federal compliance back by 10 years.

JBS, based in Souderton, Pa., which is the largest animal protein company in the world and second largest meat packager in the world, emphasized that Senate Bill 724 would help farmers increase their herd size while meeting the ever-increasing environmental mandates from the federal government.

The Chesapeake Bay Foundation and the Pennsylvania Environmental Council submitted written testimony regarding the legislation to the committee.

Video and testimony from the hearing can be found online at www.SenatorArgall.com.